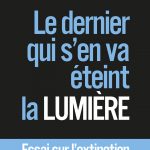 *Transhumanism and the Future of Humanity*

The abstract of the talk I’ll give.

When Max More describes “transhumanism as a class of philosophies of life that seek the continuation and acceleration of the evolution of intelligent life beyond its currently human form and human limitations by means of science and technology, guided by life-promoting principles and values”, a strong platform is there clearly defined.

As much however as transhumanism may appear as a tool at what may be labelled as Plan A, i.e. preventing the extinction of the human race on Planet Earth, it provides as well a roadmap for alternative strategies in case Plan A were to fail, i.e. space colonisation as Plan B and transmitting the human legacy to intelligent machines, as Plan C.

Transhumanism appears in that light as the ultimate adaptive strategy as it not only promotes means for keeping at bay the risk of extinction but it also ensures that two parallel projects are well under way and hopefully close to fruition should Plan A fail in the end.

With the notion of the Cunning of Reason, Hegel drew the attention to that feature of humankind that it may at times be fully unaware of what it is actively at work doing, an endeavour which only becomes visible with hindsight. In that light, transhumanism may not only be mobilising efforts at the survival of the human race on Earth or elsewhere, under its current form or an enhanced one, but implementing on that path – and possibly with better success – an entirely new step in evolution under a more robust guise.

Western humanism has been shaken on its foundations by the questioning of the double biblical message of Man created in the likeness of God and master of all creatures in the universe. While the Enlightenment rejected the view of Man in the image of God, and posthumanism undermined the image of God as master of all creatures, transhumanism is threading along an entirely different path, not only in reasserting forcefully Man as master of all creatures, redrawing their shape and altering their fabric, but also in reshaping the concept of Man in the likeness of God by remodelling him to an image much closer to that of a god endowed with limitless powers.

There is of course nowadays a high likelihood that Plan A is doomed, and that time for the implementation of Plans B and C will turn out to have been insufficient. Man would in that case not be the author of a new step in evolution, but the failure of one of its most ambitious attempts.