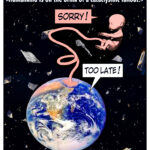 Last night I dreamed a dreadful dream. The world as we knew it ceased to be when a global pestilence descended upon it while its climate changed disastrously and uncontrollably. Standing among the ruins of the ancient Roman forum, the leader of the British revealed that he had had a vision. He had perceived that climate change was like unto the decline and fall of the Roman empire, the collapse of a civilized world.

Himself instrumental in undermining the present-day European empire by releasing the British from its grasp, he now contemplated the chaos and collapse to come when wave upon wave of desperate dislocated refugees from Africa and the Middle East would sweep into and over mainland Europe in devastating numbers which could not but seal the fate of the Continent in the apocalypse of climate disaster which Brexit could conceivably enable the island of Great Britain to survive once it had divested itself of the northern part of Ireland and then become self-sufficient by adapting to a warmer and wetter climate and establishing a rigorously defensive barrier against illegal immigration such as human-rights legislation could now be prevented from prohibiting.

The failure of the COP26 now seemed virtually assured following the unproductive G20 meeting in Rome. That being so, climate change, which cannot be stopped, would now be seen and widely understood to be unstoppable. This would be the sign which would gradually lead to serious mass migration on a catastrophic scale. On the British side of the English Channel a formidable defensive barrier would rise as approved international travel gradually became increasingly limited and the Channel Tunnel was sealed. To protect their island against the growing disorder on the Continent the British authorities would not only not be rescuing illegal immigrants in the Channel any more but would be prepared and entitled to intercept their craft to turn them back or even sink them if that were deemed necessary.

When a civilized world collapses only the completely ruthless survive, said the leader of the British, in Latin as well as English, if they can seal themselves off from the worst effects of the cataclysm. This was what Brexit was preparing and enabling the British to do.

The voice faded, and I awoke to find . . . that I had not been dreaming after all.